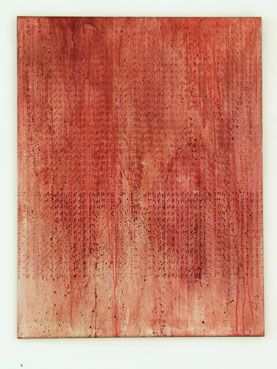 Everyone loves a code. From puzzling to see the patterns in sequences of numbers or letters to working out the trickiest anagram in a crossword, codes have long kept the human mind occupied, and often to a useful end. Charles Babbage developed a whole language for programming computers based on a code, which used only the numeral one and the zero. His minimal means is still used to communicate whole worlds of information technology. In her unmistakably modern art work, Irene Ferguson uses one of the most famous codes of all, Braille, to convey to the viewer one of her grandmother’s epithetical sayings: “Children and chickens should be fed little and often.” In this work, something personally significant to the artist and passed on to her through the oral tradition is cast into written form. Ironically for a work, which is clearly about communication, this text is not immediately comprehensible to either the sighted or the blind. It needs translation in order to be understood by those who can see, and to be read aloud by those who cannot. Once these screens go on display, viewers are controlled by the protocols of the museum and are prevented from touching the surfaces. Yet it is the treatment of the surface, which is so redolent with meaning in these screens. Much more than the interface of an interactive computer, they are in a sense, “touch screens.”

Familiar with Braille from an earlier art work project in England where books were created by artists for a traveling art library, Ferguson uses this form of writing for the unsighted knowingly. Like telling a rosary, where beads are a mnemonic aid to prayer, Braille is read with the fingers. Named for the blind fifteen-year-old boy in the early nineteenth century who developed it, Braille’s combinations of dots standing for letters in the alphabet are embossed by hand (or with a machine) onto thick paper. While it is a universal language available to all, it is also a message system only accessible to those who feel. As such it is a visual experience with subtle symbolic connotations.

The idea of feeling invokes both the realm of the emotions and sentiment and also the physical aches of love and loss. It also gestures to the business of art making itself and to the hand, which makes the art suggesting that things are learned not only through the eye and the mind but also through touch. Such haptic knowledge (from the Greek haptikos: of or relating to or proceeding from the sense of touch) is learned through practice, and seems particularly linked to craft traditions where the hand guides the making, say for example when throwing a pot, or forming a letter in calligraphy.

This medium of expression is linked to the personal message of caring and sustenance, feed your children with the frequency you would your hens, if you want them to flourish and repay you with happiness. Such customized wisdom passes from one generation to the next, in this case picked up like a torch from the grandma and passed to the grand daughter who is her namesake. Like the hand-knitted patterns of woolen sweaters from the Isle of Arran in the west of Scotland, designed to shield but also identify the wearer, these words grow familiar from repetition and use, and represent the absent matriarch, whose love continues to protect those who remember her. Like a mantra, a sacred verbal formula with mystical potential, which Hindu believers repeat in prayer, mediation, or incantation, the same line on chickens and children is repeated forty two times in Braille, punched in to each panel. Beginnings and endings are randomly chosen with the phrase centered and then worked out to the edge like a motif in a textile. Here are memories drifting down the years, wisdom repeated in the oral tradition but now written down, recorded not in the dot and dash of Morse code for aural transmission, but in the perforations of Braille.

Those who know the story of the blind, deaf and dumb girl Helen Keller, will remember how Braille transformed her life. Once taught to understand it, she could not abandon the world of imagination and knowledge, which opened to her through books, and she sat up reading until her fingers bled from abrasion. Using nail enamel to stain her sheets of aluminum, Ferguson manages to simultaneously suggest bleeding and weeping, with each hole-admitting colour. Like a skin, which blushes and perspires with exertion and emotion, these screens are sensate and reactive. Leaking and leaching like faulty vessels, with the passage of fluids staining and tracing routes downwards, they also seem to be about the female condition. Their surfaces can be read as inscribed with a story written in tears, milk and blood, a timeless story, and one of universal significance.